Ever Mainard Breaks The Rules; Conquers The Internet 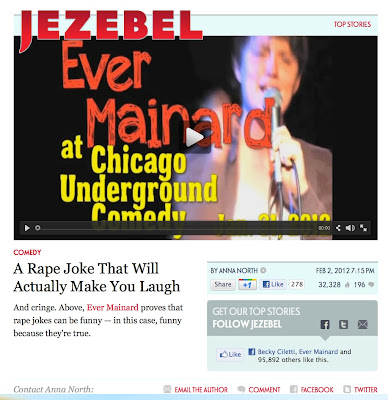 Last Tuesday, at the tail end of an already excellent show, Ever Mainard did a set at Chicago Underground Comedy that blew a lot of people's doors off. She discussed a real (and painfully recent) incident where she had a terrifying encounter with a sketchy dude at the Morse stop on the Red Line. She openly broached an extremely sensitive and universal subject (the fear of sexual assault) and, in doing so, dipped a toe in some dangerous comedic waters.

Anyone who's done stand-up for any length of time has sat through terrible open mics and listened to terrible comics tell terrible jokes about the "terrible two" (yes, I just made that up): rape and abortion. 99.4% of all jokes that touch on these subjects are gaggingly awful attempts at shock-value comedy.

But we knew even before she walked off the stage that her set was one of the rare exceptions to this rule. It was honest, and raw, and rough - and had the entire room of men and women laughing. Not just the "ha ha, and clever juxtaposition of words and ideas" laugh, or the "ha ha, that caught me by surprise" laugh, but a - bear with me for using such a grandiose word here - transcendent laugh. It was an "I can't believe she's saying these words, and I can't believe she's making them funny" laugh. And it was definitely a "this has been my experience, too" laugh.

She was discussing something terribly painful that most people avoid acknowledging or discussing in regular conversation, and she was doing it ONSTAGE. And she was owning it, and re-forming it, and channeling it into something entirely new.

It was something really special. People stuck around after the show to tell us so, and asked us to put the clip online, so their friends could see it.

The next morning, Ever asked me to put her set online, so I edited it up all slick and pretty (and was inspired to write a new bit of music!), and uploaded it, texting with her all the while. Shortly thereafter, a little "ping" went off in my head, and I texted her "What would you think about me titling this clip 'Here's Your Rape?'" (a line she repeats in the bit). With both of us knowing full well it might open up a whole can of ugly internet worms, she said yes, and I changed the title.

Then I spent about an hour emailing various online media outlets I thought might be interested in posting and commenting on it. Feminist blogs, gay blogs, Chicago blogs, comedy blogs, street harassment blogs, and even public transportation-related blogs. LOTS of positive response, and lots of re-posting.

Below is a sample of the places where Ever's "Here's Your Rape" video has been posted online in the last two days since it went online. The Jezebel post (as of right now) has been read over 33,000 times, and the count on my YouTube posting is stuck at just under 5,000, which I know from experience means it's getting tons and tons of hits (which will show up in the hit count sometime later).

Jezebel: "Ever Mainard proves that rape jokes can be funny — in this case, funny because they're true."

Strollerderby (thanks to Carolyn Castiglia): "Mainard makes a lot of excellent (and hilarious) points in this clip"

Gapers Block: "Local comic Ever Mainard had a set this past Tuesday at Chicago Underground Comedy that people are still talking about."

Laughterkey: "Perfect example of how joking about rape can be funny if it’s clever, insightful, honest and/or you know - funny. The “here’s my rape” thing is something every woman can relate to, which is sad, but she keeps it from getting too dark by staying wonderfully absurd."

RedEye Chicago: "Props to Chicago funny lady…@evermainard for getting props from @Jezebel!"

geriatricgretch: "this is fantastic. I pretty much think this all the time."

jenawithonen: "it’s funny because it’s true; i can’t count how many times i’ve been walking by myself and thought this."

And, of course, our old pals at The Apiary.

EDIT 2/7/12: This video is being reposted and discussed in a lot of places online, and I just want to clarify: Ever is discussing a real event that happened a few days before and all the details were as she describes them here.
Posted by Elizabeth McQuern at 2:21 PM