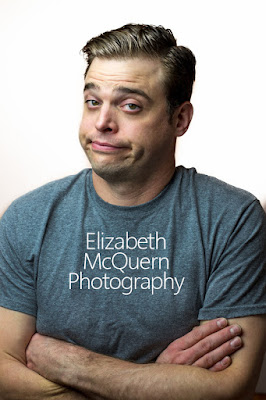 My husband and I met through Chicago comedy. First we were stand-up open mic buddies (along with two friends of his, fellow members of the production company Blewt!, which he's been associated with since its beginnings), then, as I slowly started moving behind the camera, producing live shows like Chicago Underground Comedy - aka "ChUC" - for 8 years and creating original short comedy films which were screened at places like Second City, The Lincoln Lodge, and the Just For Laughs Festival), I happily became sort of a "silent partner" in his comedy adventures, usually with my camera in hand. (Our current comedy status: Bryan is in his eighth - I think? - year of teaching at The Second City, and I'm on "indefinite maternity leave" from ChUC, currently making my first comedy short film in four years, shooting about every two weeks because I have a, you know, baby.) 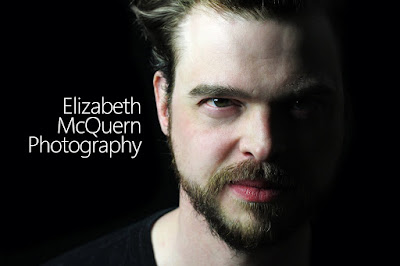 I took photos at several of Blewt's show "Don't Spit the Water," a live comedy game show that ran for ten years, and was pitched by the Blewt! gang to the bigwigs at Comedy Central, MTV, and Nickelodeon. Blewt! is a broadly talented group of real creators, several of whom started doing improv in college together - including Bryan - so there's 15 years of comedy bonding between these crisply quipping judges of the acts comedy performers have only a week to put together. 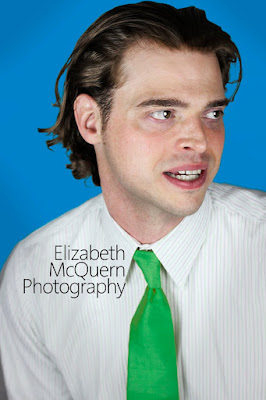 I sat in the front row and took photos of almost every season (8, so far) of Blewt's "Impress These Apes," a ridiculous and brilliant 8 week talent show in which Bryan played one of the Ape judges, Bushmeat, the hyperintelligent redneck ape from the future. (Combining those two descriptors was a feat of its own, if you ask me.) The concept of the show is that a scientist created superintelligent apes which turned on humanity, and traveled back in time to judge an 8-person comedy show, the results of which would determine the fate of humanity. (I know..."what??") I followed the show from the Playground Theater to the Lakeshore Theater to ComedySportz, where it's been for the last few seasons. Here's a cool Tribune review of the show, featuring one of my credited photos! 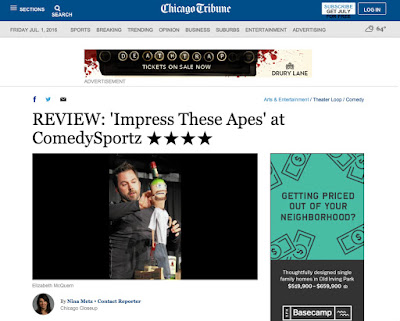 To add to the ridiculousness of the show's premise, there's the fact that Blewt's senior producer Steve Gadlin took his silly idea "I Want To Draw A Cat For You" on NBC's "Shark Tank," and convinced Mark Cuban to invest $25,000 in the concept as a business. That's Bryan in the middle in the photo of the three apes. Paul Luikart (Captain Apehab) is to his right and Erica Reid (April Mae) is to his left. 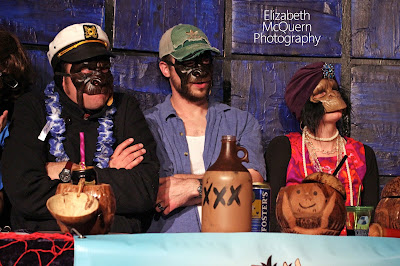 But the funny thing is, only 3 times since we've known each other has he let me take headshot portraits of him, and only when he REALLY needed them (for publicity for a show, for the "teacher's wall" at Second City, etc.). And even then, about 75% of his photos were him making such ridiculous faces that the photos would be utterly useless as headshots or promo photos. Kind of like our three year old. 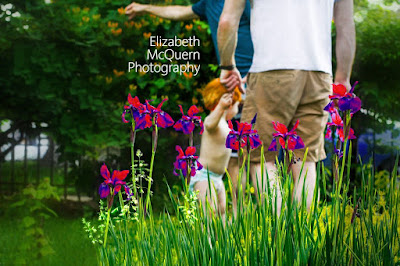 I am a compulsive photographer who has the camera out and is focusing on something every single day. But none of the people in my family give a crud about stopping what they're doing to "pose" for me. Husband, kid, and cat. Which is cool. I would feel the same way. When I'm doing something I enjoy, I don't want someone bugging me. It's usually when I unobtrusively record a natural, pure moment with a click of my camera, that I'm really, really excited about a photo. 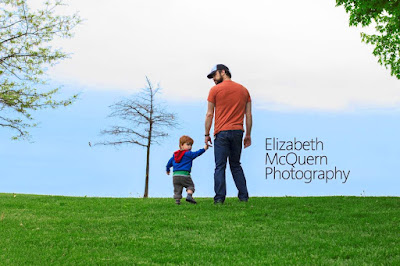 And although I have lots of cute closeups of my husband and son together, I've always had a fondness for the photos that focus fuzzily on them from afar. It makes the photos feel more universal. It could be any father and son. It could be you and your dad when you were three, or you and your now-grown son when he was but a wobbly toddler.

Check out more of my photos at my website.
Posted by Elizabeth McQuern at 9:33 PM