Steinways and Tomatoes - A Family Reunion 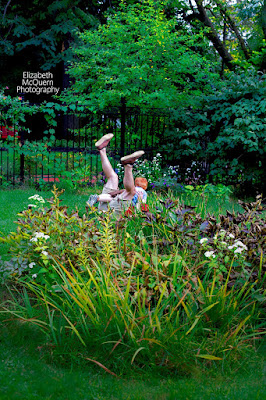 My brother's spouse had not seen his aunt (his father's twin sister) or his two first cousins in over 15 years. Sunday my husband and son went to their house to meet the family, and it was a beautiful day of enjoying the outdoors (eating tomatoes straight off the vine!), running around the yard, and getting to know each other. 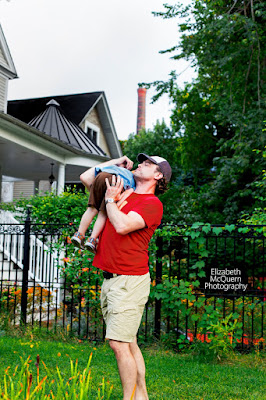 Much like my brother-in-law, his family are the warmest, friendliest people you've ever met in your life. We all struck up easy conversations, and of course my son enjoyed being the center of attention most of the time. 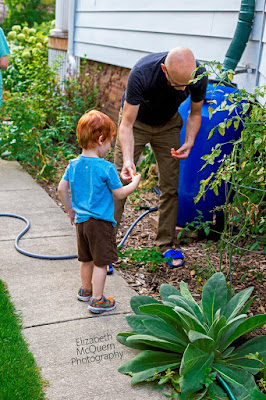 I could see a physical resemblance among them all, and definitely the same love of laughter and music. Paul sat down at his Steinway and began playing a song from his early days in church as a little boy, and the entire rest of the family began to join in singing the song! He had no idea they all knew the words, and it was truly a beautiful moment. I would have cried, except Paul put me in charge of taking a brief iPhone video of the song. 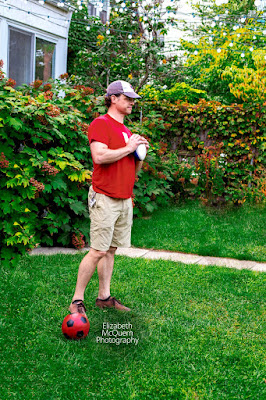 I haven't friended them on Facebook yet or reached out to them otherwise, and I don't post people's photos without their permission, but I thought I'd include some I took of my husband and kiddo while we were there that day. Do you think my son gets enough attention and playtime? (Yes. Oh, yes, he does. I think that top photo of him tackling my husband is the very definition of the word "frolic.")

Find out more about my work at my website:
http://elizabethmcquern.com/
Posted by Elizabeth McQuern at 10:22 AM