Henry Darger and the Realms of the Unreal 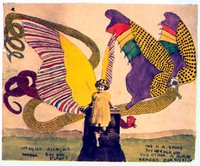 Earlier this year I saw the documentary about the late Chicago "outsider artist" Henry Darger, and his 15,000 page fantasy manuscript called "The Story of the Vivian Girls, in What is known as the Realms of the Unreal, of the Glandeco-Angelinnian War Storm, Caused by the Child Slave Rebellion."

In Darger's fantasies, orphaned and constantly imperiled but valiant Catholic school girls save the universe from fantastical monsters and cruel overlords.

Darger had a terrible childhood and, after his mother died and his

father was unable to care for him, he was raised in abusive and emotionally barren institutions like the Illinois School For Feeble Minded Children. He was rejected from military service, socially maladapted, and channeled all of his frustrated energy into his works, in which he sometimes made a guest appearance as a brave hero and defender of children.

He worked for decades in anonymous menial jobs, had very little contact with the outside world, and worked every night for hours and hours on his secret watercolor masterpieces of fantasy and fable. The religious imagery in his art

reflects his devout Catholicism, and his androgynous Vivian Girls hint that his social isolation both in childhood and adulthood may have been so extreme that he literally didn't know the anatomical differences between males and females.

Recently a dance company in Maryland has staged a show based on Darger's works. From Dance View Times' review of that show:

Girlish games of hopscotch turn sinister as they quicken, distorted by flinging arms, unruly heads and muddled footwork. Repetitive semaphoric poses, a hand on the cheek, a palm at the heart, hands at the ears, suggest a secret language, child-like but formidably complex in execution. 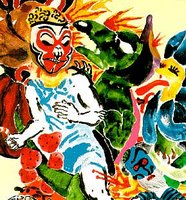 In 1984, an artist named Paula Regos was also inspired to do a series on canvas after learning of Darger's Vivian Girls. From a Tate article about Regos:

Posted by Elizabeth McQuern at 11:45 AM