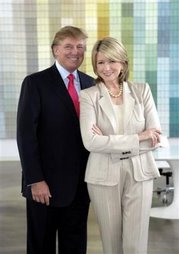 Yes, of course, Donald Trump is a megalomaniac. And a short-fingered vulgarian who probably doesn't realize he married a heavily altered Slovenian man.

Yes, he talks crap all the time. Yes, he's competitive, and he probably would like to see Martha Stewart ground into a fine powder and sprinkled across the Hudson Bay. (And no, I don't have much love for her either, since she seems about evenly matched for him in the unchecked lust for money, power, and glory category.)

But this latest round of celebrity ego war just seems phony. La Trump is going for extra print, and extra Google hits, and extra publicity, and he's getting it.

Trump also offered Stewart some advice: "She should just go into the sunset, relax, have her little daytime show, and have it do as well as it can do, which isn't particularly well."

"Essentially, you made this firing up just as you made up your sell order of ImClone," said Trump, in the letter's most caustic remark.