Bella is a Generically Aryan Looking Babe After All 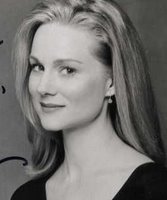 I started a new comedy writing class this week. It includes four people from my last class and a new bunch who I look forward to getting to know. A lot of energy and laughter in the room already, and we haven't even started writing yet!

Apparently there was consensus among the new folks that I look like Laura Linney, which I take as a compliment, because she's a nice looking chick, although she tends to play a lot of squeaky clean square types. (Ahem.)

But it reminds me of a long-ago quote from her, when she starred as the "in love with Richard Gere, nearly strangled 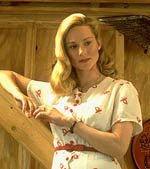 in the courtroom by Edward Norton" lawyer in Primal Fear. She was just starting to get worldwide attention, and commented that she seemed to have a lot of young, male, German fans, who were big into the fan letter writing. She speculated that perhaps she appealed to those who go for the Teutonic/Nordic type.

Just goes to show me that all the red hair dye in the world (roughly half of which I use every few weeks to cover the blonde) doesn't make me look any less like a fresh fraulein. Can't hide your roots, I guess.
Posted by Elizabeth McQuern at 4:34 PM