The cult documentary that entranced me (and countless current fashion designers) the minute I began watching it is now being staged as a musical, and will soon be a feature film starring Drew Barrymore and Jessica Lange.

Grey Gardens, starring the very real Jackie Bouvier Kennedy Onassis cousins "Big Edie" and "Little Edie" Bouvier Beale, was a verite hit in 1976, when it chronicled the tragic (and weir 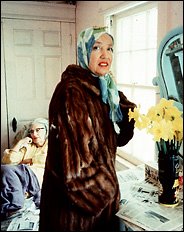 dly beautiful) decline of two former society belles, an eccentric mother and daughter, who survived alone in a shambling mansion in East Hampton.

Nor did it hurt the success of "Grey Gardens" that main characters, 81-year-old Edith Bouvier Beale and her 58-year-old daughter, Edith, known as Big Edie and Little Edie, were the aunt and cousin, respectively, of Jacqueline Kennedy Onassis, who a couple of years earlier had somewhat reluctantly stepped in when the town of East Hampton threatened to evict her relatives from the unsanitary and overgrown eyesore they shared with dozens of cats and some semidomesticated possums and raccoons.

It's amazing to watch the story of their lives unfolding, highlighted by the abuse and emotional indifference of the men in their lives (especially Little Edie's father, the identity-crippling Phelan Beale, who was obviously unfaithful to the ever-denying Big Edie).

It's especially mind-blowing to see modeling photos of young Edie, who was inarguably stunning, and realize that, given her family's stature (cousin Jackie married a President and a billionaire, cousin Lee married European royalty), she was positioned to marry at least as well, and live a life of power and wealth.

Instead, her ambitions for art and independence were thwarted at every turn, and her parents shaped her into an emotionally stunted, psychologically dependent woman-child who never had the inner strength to break away and be her own person.

In the end, the two women lived holed up in a few rooms of a huge, decaying mansion, eating canned food, tolerating the filth of countless cats, raccoons, and possums, wistfully playing old records and having the same power struggle arguments time and time again. Absolutely fascinating.
Posted by Elizabeth McQuern at 10:31 AM