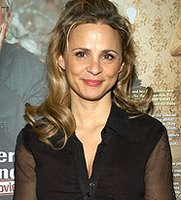 Strangers and candy. Two things that don't go together.

Two things as mismatched as Amy Sedaris as she appears au natural, and as she looks in full makeup and costume as Jerri Blank.

Yes, that's the same person in both of these first two pictures. (It took me a long time to convince my dad that this was true.) The woman has a face like silly putty. There's something utterly fantastic about a chick that foxy being so hell-bent on fuglifying herself beyond recognition. As if that weren't enough to make you love her, she's also heavily involved in bunny rescue, and runs a cheeseball and

cupcake enterprise out of her apartment, selling them herself during intermission at her stage shows.

I've been watching disk one of the first season of Strangers With Candy, the much too short-lived Comedy Central series about a grotesque yet somehow sympathetic reformed prostitute and drug addict returning to her former life as a high school freshman. It's like an Afterschool Special gone bad, with Jerri trying to actually fit in with the "other kids," and being subjected

to the usual trials of high school (dating, trying out for the school play) as though she were a 14 year old. It was also a 2005 movie, which is in my Netflix queue (with an undetermined release date).

The disk features commentary for each episode from Amy, Paul Dinello, and Stephen Colbert, who all starred in and wrote the show, and who met as students at Second City, where I am currently studying comedy writing. It's cool to hear them make mention of teachers and concepts that I'm familiar with.

Makes me wish that Exit 57 was available on DVD as well. Can't seem to find it

anywhere, although here's a quick clip of a sketch starring Amy and Jodi Lennon as pony-obsessed girls.

P.S. For those of you who have been living under a rock for the last few years, yes, Amy's brother is David Sedaris, essayist, unparalleled Billie Holiday impersonator, NPR darling, and Santaland Diarist.
Posted by Elizabeth McQuern at 6:28 PM

Yea, when Strangers first came on I blithely let my teen and pre teen daughters watch it while I was too busy to sit down with them. I recently caught an episode, with renewed interest realizing that Amy was the sister of my long favorite writer and NPR commentator and found out that not only was it wholly inappropriate for my daughters at that age, but it was freakin HILARIOUS. Talk about pushing the edges of television comedy! I cannot believe what they were getting away with! Now I seek it out whenever I can, and will blame my children's warped and twisted humor on Strangers, not my parenting!