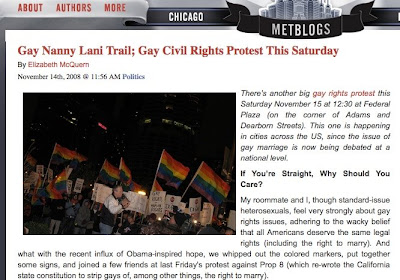 "Really? People really believe that gay people choose to be gay? Choose to be part of an oppressed minority subject to violence and discrimination, when they could just take a couple of seminars and re-program their sexual orientation? This flies in the face of biology, neuroscience, and common decency to fellow human beings.

"As has been pointed out in recent media examples, so what if changing the law to include homosexuals in marriage rights is “redefining marriage in America?” If we hadn’t redefined marriage at other points in history, it would still be illegal for black people to marry each other. In 1967, it was illegal in 1/3 of states for President-elect Obama’s parents to have been married to each other, because marriage between a black person and a white person was illegal."

Posted by Elizabeth McQuern at 12:10 PM

Email ThisBlogThis!Share to TwitterShare to FacebookShare to Pinterest
Labels: equal rights for gays, my writing in other places, politics


I like to think if it was a choice you'd have to choose right after watching "the film."