A very dramatic day today. My roommate's crazy cat came into my room (my cats' only safe zone), attacked my baby, Calpurnia, and ripped her ear apart. After freaking out and crying (and throwing up while putting her in her carrier, because I was upset that she was so upset), I took her to my vet, who put her under for surgery, stitched her ear back together, and gave me antibiotics and pain medications for her. When we got home and I went to take a photo of her with her permanently bent ear and her much-hated Elizabethan collar, I got this shot, where I think she looks like Space Princess Kittycat from the 44th Century.

Also, even though I got her to the vet as soon as I could, and they began surgery on her right away, by the time she was ready to be taken home it was 6:00, which is when Bryan's teenage stand-up students' show at Second City was starting. They were all excited because they knew I was going to film them and take photos. Bryan is really proud of the kids and the 12 weeks they put into polishing and workshopping their jokes, and I was super psyched to see them in action and write a little story about them for Gapers Block. Oh, well. Maybe next time. 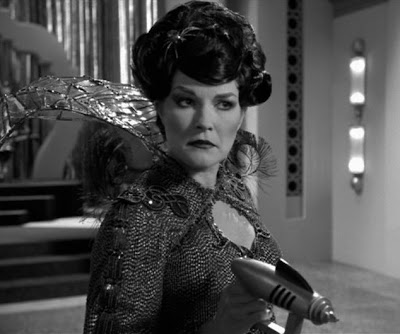 Edit: here's what she reminds me of - Federation starship Captain Kathryn Janeway as Queen Arachnia in a special episode of Star Trek: Voyager.
Posted by Elizabeth McQuern at 7:42 PM

"I am the gate keeper. Are you the keymaster?"

From a tree trunk to a school house to the big city. She is a survivor. How is her roommate? Grandmakitty.

I KNEW it had to be a Nellie cat. Those spastic, psycho love beasts.

Thanks Yvette. I figured if I couldn't make a little beauty and fun out of difficulty I wouldn't be a very good comedian, would I?

Oh, hai Mom! Thanks for checking in on our babies!

James - well, yeah, you didn't think it'd be one of mine, didja?

btw, I am NOT a spastic psycho love beast!