Recently I've done some photoshoots with people who wanted promo photos for comedy shows/stand-up, and came to me with specific ideas of visual things they wanted to achieve. In every case, I tried new things, had a great time, and handed over a final product that my clients were very happy with. (I say "clients," but two of these people were already friends of mine, so laughing and goofing all the way through the shoot was pretty much a given.)

Anyhoo, here they are. First, Monique Madrid, a talented performer who's enjoyed many an adventure aboard the Second City tour boats, is also a hairstylist and makeup professional, who combined comedy and her day job to create Monica Barcelona, who will debut at the Chicago Women's Funny Festival in her show, "Bitch, I'll Cut You." Then, Nancy Beckett needed a promo photo, also for her show at the Chicago Women's Funny Festival. She brought along her daughter and we whipped up something resembling a Thanksgiving feast (then had a friend Photoshop in some turkeys for good measure). Here's the original shot: And here's the poster: 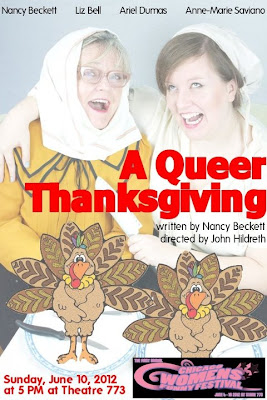 And, just last night, stand-up Jeanie Doogan came by to shoot some headshots and promo photos. She wanted to do a apron/rolling pin/cigarette/tough mama shot, and I'm happy to say she was delighted with the final product. Here's regular Jeanie, and "Don't Mess With Mama" Jeanie: Yay for awesome comedy gals!
Posted by Elizabeth McQuern at 11:09 AM