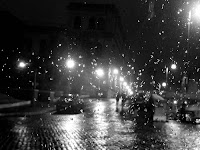 I guess it had to happen sooner or later. First off, I'm fine. No one was hurt. And before the comments start coming in, yes, my roommates both said "it's going to rain, take the bus, idiot," before I left, but I'd been cooped up inside writing most of the day and I wanted to do something really physical.

Last night I was biking home in the rain at about 9:00 from DePaul after taping Carrie's stand up set there and, steaming my way through an intersection (Broadway and maybe Addison? I was already off track and disoriented), when I was swept up by the wind, almost got knocked into the road, skidded hard, and was thrown into a parked car. I banged my arm pretty hard stopping myself but wasn't really hurt, just really, really scared. I was totally out of control for a second, and really thought I was going to hit the street and get run over. I walked past the car and gestured "your car is fine" to the dude sitting inside, and his body language was all "I don't care about the car, are you okay?" He looked as scared as I felt. I was a little panicky and disoriented for a few minutes afterward but I'm fine now.

Funny, while it was happening, I was totally terrified and thinking "my mom will be so sad if something happens to me, and who will love my cats if I die?, and I hope I said something extra sweet to Bryan last time I saw him," -- yet also had enough time in my brain to get annoyed and think "of course this would happen today, the very day I write a long post for Metblog Chicago called '10 Reasons to Bike Chicago More.' I'd better not die because I'm sure they'll mention that conveniently ironic fact in the Trib - 'Local Comedy Producer, Bike Enthusiast Killed The Very Day She Blogged About How Swell Cycling in Chicago Is' and that would really tick me off."
Posted by Elizabeth McQuern at 11:42 AM

Bike accidents are terrifying. So is riding your bike in the rain. *cough*

I'm glad you're alright. And hey, at least you have something witty to write about.....

That is ironic. why don't you post about how much you love being poor today then go buy a lottery ticket and see what happens?-

Oh no Elizabeth! Wow, I'm glad you're ok. Are you bruised up and sore?

gah!!! so glad you are okay!!! scary, scary stuff. believe me, i know. haha. :-) and actually, i am finding that this season (which would be my fourth season riding semi-regularly in the city), i think i am finally too mentally exhausted to continue commuting via bike -- sad but true. oh well. :-/

I'm fine today, thanks, Carrie. My arm doesn't hurt, as of this moment. I'm mostly just shaken. I really should have known better. When I passed the El stop at Fullerton I thought "the rain is making my brakes wet, maybe I should throw my bike on the El and go home that way." But I was stubborn.

And hey, K-Rock, if you think about it, we've essentially both taken one for the team. We both wiped out during comedy excursions. I hope you get your mojo back.

yeah, me too, but for now i'll just pay the $75/mth to ride the CTA... bleh. :-/ i've already seen too many near-accidents and bouts of biker road rage and have wiped out myself, and it's not even the middle of May. i am just way too wary of this summer, i guess!

everyone be safe out there, at any rate, and always wear your helmets and use lots of blinky lights!!!

That's it, I'm buying you some Iron Man armour for Christmas. Sadly it will be non-functional and probably too heavy to wear, but at least it will offer protection while cycling around a city that, you might have heard, is known for its wind. ;p

Aw...Admiral Neck, that's sweet! And because you're English, you're offering "armour." The "u" makes it even better protection. Truly, I should have known better. Trust me, my roommates are giving me enough grief (by way of mocking) that I'll think twice next time.