Welcome to the Crazy Line, Again 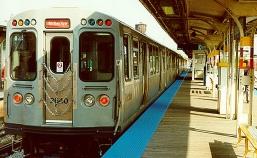 I'll be your host, Stinky Crazy Beggar Man. Would you care for coffee, tea, some illegal and uncomfortable soliciting?

I was headed downtown for a Cartoon Network something-er-other, when I had what is arguably the worst public transportation encounter of my rail riding career so far.

It was only 6:30 PM, and I was on the Red Line approaching the Belmont stop. I was standing near the doors near a young woman who had eye-checked me with that "hey, you're one of me" glance young women sometimes give each other in such situations. It's sort of like what really tall guys do to each other across a room, in a "hey, other tall guy, I see you, and I see you seeing me" way. (It happens. I've done extensive observations in the wild.)

Anyway, the door from the next car bursts open, which is usually a bad sign. A young, and nevertheless gnarly, man stumbles in, with his funk entering a few seconds before. I recognize him - he is mentally ill/high/begging every time I see him, and I know he's going to approach me. He goes for random nice looking white girl #2 first instead, touching her sleeve and asking for money, giving some line about his mental health facility. She moves away from him, avoiding eye contact, and then he goes for me, grabbing me by the sleeve and trying to turn me toward him.

An older black man with a work companion as his seatmate breaks out in a commanding voice: "Don't be stupid, son, CPD on the tracks! Cut that shit out!"

The younger man wobbles and slurs, and says "For real, man? For real CPD?"

The older man continues to berate him. "On the tracks at Belmont, motherfucker, you'd better get outta here. Get off the goddamn train!"

We approach the station and the train slows, and the younger man heads for the doors, looking around for the police as he plans his exit strategy.

The older man yells more, "You stink, boy! Get the fuck outta here, with your filthy nigga ass, and have some goddamn respect for yourself!"

The doors open. Younger man takes off in a hurry, and random nice looking white girl #2 eye checks me again as she scampers off. Our exchange of expressions was very "That was close, huh?" Or hers was, at least. I was wearing my newly patented blank, neutral city face. I wish I'd been more mindful, and given her a proper "You know I had your back, right?" facial expression. We approachable-looking pink-cheeked types need to stick together.
Posted by Elizabeth McQuern at 8:52 PM