I will always fondly remember the first wedding I photographed. It was in the autumn, three years ago. It was full of glitches and unforeseen challenges and required a lot of flexibility and resourcefulness - and it was wonderful! 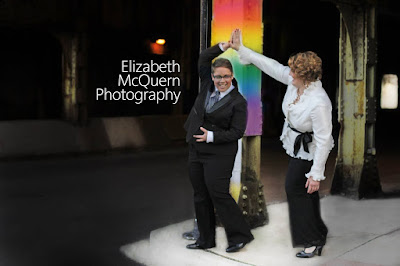 Former neighbors who kept seeing me post photos of my baby (and other photo work) on Facebook sent me a Facebook message, saying they wanted me to photograph their special day. Still feeling "not quite back in the game again" after having had my son, and never having photographed a wedding before, I told them I was flattered but declined. My thoughts ran along the lines of "I don't have a good enough camera," "I've never done this before," and "This is a once-in-a-lifetime day, what if I screw it all up?"

But they insisted, and I'm so glad they did. Oh, those glitches I mentioned? They made things turn out more magically than they might have otherwise. My assistant for the day, my very close friend Sydney Davis, and I entered the venue - a former industrial space turned into a huge, white open space perfect as an events venue.

Sydney and I were in touch with the brides via text, as they were having final hair and makeup touches done at a salon nearby, and began exploring the space, finding the good lighting, using Sydney as a test subject to figure out how and where I should be during the ceremony. 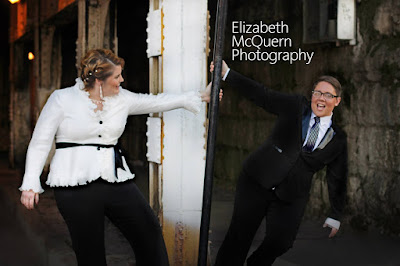 The first hint that something was wrong was when I approached a couple who were waiting for the ceremonies to begin, and asked them if they minded being my test subjects and if I could take a few snaps of them. "Sure," they said, and I took a few shots, making little adjustments on my camera as I went. "So which of the brides are you friends with?" I asked. They looked at each other, a little confused. "Uhhh, Jason?"

Sydney and I looked at each other - OH, NO! Were we are the wrong place? Were there two places with the same name, and somehow we went to the wrong one? If so, would we be able to make it to the other venue on time? I checked my emails and messages and texts. Nope, we were at the right place. 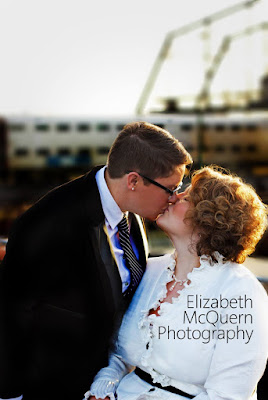 Long story short, the venue had double-booked the evening! But it wasn't the end of the world; this was their "first" wedding, a smaller civil ceremony with just a few friends. The "second," bigger wedding (both families, lots of friends, etc., was a few months later).

But here's how chill the brides were - they decided that since it was near the golden hour anyway, we'd do a few pre-ceremony photos near the venue, and then perform the ceremony itself on the roof of the building, which resulting in glowy, gorgeous backlit photos with trains and all the character of the neighborhood in the background.

I mean, really, look at this photo below. It's still one of my absolute favorites. 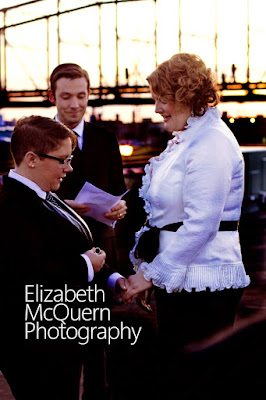 Afterward we joined the bridal party and friends for a small celebration at a place nearby and many glasses were clinked as toasts were made - these two were so in love, and their friends were clearly so happy for them. You can't help but soak up that kind of vibe when you're working with a group of people who are happy and celebrating love.

Being a nervous perfectionist, I went home and immediately downloaded all of the photos I'd taken, and double backed them up. Had I screwed them up somehow? Had I lost all photographic documentation of these special people and their special day even though I didn't have a super expensive camera and no experience photographing weddings? Nope. The photos were lovely. Luminescent. The love was clear to see. 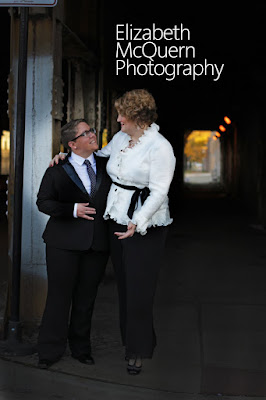 The couple were thrilled with our results. Their effusive text messages as I kept sending them little previews of phone screenshots made me feel amazing, and proud of my work. They said "Okay, our big wedding will be in several months, all of our families will be there, and we want you to come back and do your magic again." And I did, but that's a whole other story.

(Sorry for the huge watermarks on these photos...I do my watermarks a bit more subtly now but these copies were the easiest ones to find for this post.)

Thanks for reading and feel free to check out more of my work at http://elizabethmcquern.com/.

Posted by Elizabeth McQuern at 2:25 PM